Here are the first three sentences:

Procter & Gamble Co. this fall will start charging more for household staples from diapers to tampons, the latest and biggest consumer-products company to announce price hikes.  The maker of Gillette razors and Tide detergent cited rising costs for raw materials, such as resin and pulp, and higher expenses to transport goods.  The announcement, which came as P&G disclosed its quarterly financial results, follows a similar move last month by rival Kimberly-Clark Corp.

“Blame costs. Announce your price increases. And watch your competitors.”

In these three sentences are three incredible lessons on raising prices.

Costs probably did go up, but I would bet the costs went up much less than the price.  Costs are pretty much the only reason customers accept for price increases.  The truth is probably closer to this sentence.  “P&G will raise prices so they can make more profit because they believe their customers are willing to pay more.”  It’s probably true, but they could never say that.

Notice that last month Kimberly-Clark announced a price increase (and they blamed increasing costs).  Their price increase isn’t due to take effect until late June.  Since I’m writing brutally honest news copy, this is what their news release could have said, “KC is announcing a price increase for late June, but they will only implement it if competitors like P&G also agree to a price increase.”  To say this out loud is a violation of the law.  It is illegal to collude with competitors.  But the implication is there.

P&G likely saw the KC announcement and thought, “we could raise prices or we could keep prices low and take some additional market share.”  But what would happen if they didn’t raise their prices?  KC likely would not have gone through with their price increase and market shares don’t change.  However, if P&G raises their prices, KC goes through with their price increase, market shares still don’t change, and everyone makes more money.  This is called implicit collusion.  Nobody talked to anybody, they just made assumptions about how the other company would act.

It is possible that I am completely wrong on this.  It is possible that costs really did go up.  That both KC and P&G independently and myopically decided to raise their prices for the sole purpose of covering their costs. But that doesn’t negate the lessons.  Blame costs, announce your price increases and watch your competitors. Blogcast #60: How Much Does a Buyer Values Your Product?

This is an Impact Pricing Blog published on May 18, 2022, turned into an audio You probably know that when we’re negotiating, we do gifts and gets. We don’t give 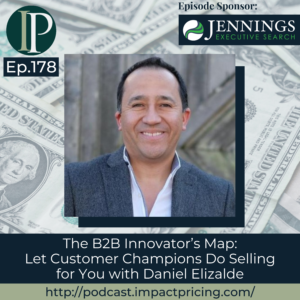 Ep178: The B2B Innovator’s Map: Let Customer Champions Do Selling for You with Daniel Elizalde

Daniel Elizalde was an IoT Product Manager Instructor at Stanford University. He used to work

This is an Impact Pricing Blog published on May 11, 2022, turned into an audio